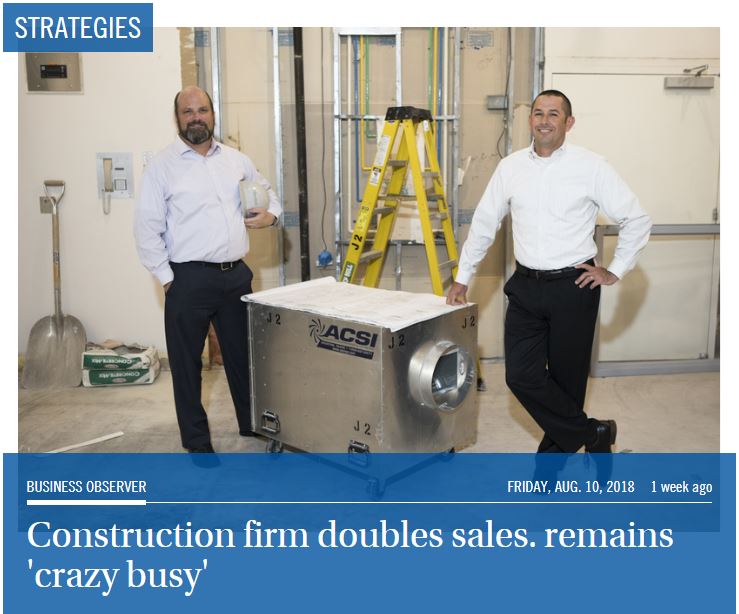 By apaskoAugust 17, 2018Featured
No Comments

A commitment to core values — and to do the work others won’t — drives rapid growth at J2 Solutions.

J2 Solutions founder and President Jess Fronckowiak believes in the power of the first day.

Like the time recently the Venice-based construction company, which has doubled revenue and payroll, to $16 million and 50 people, respectively, since 2015, brought a donkey to the office parking lot. The donkey was in honor of a new employee’s first day with the company — and that person’s belief that his prior employer was equivalent to the other word people use for donkey.

Even before an employee’s first day the company sends a letter the newbie’s spouse or partner, thanking them and welcoming them to J2. There are other, post-first day perks at the company that Fronckowiak and J2 Executive Vice President David Fouche believe provide separation in the all-out industry battle to land employees. That includes two major parties a year, one around Christmas and a summer BBQ, the latter of which includes families and more than $10,000 in prizes for employees. The company also recently added health care programs and profit sharing.

“We go above and beyond to take care of our team,” says Fronckowiak, an upstate New York native and University of Florida graduate who founded the company in 2002.  “We are always looking for something to do to make things fun.”

The company’s energy and focus on culture has paid off, says Fronckowiak, in high retention rates. That, in turn, has helped the company win more construction projects in health care, including hospital and senior living work. Health care is about 55% of the company’s business, with the other work coming from general commercial, retail and education projects. Combined with the ongoing industry surge, J2 is significantly bigger than when Fronckowiak took on home renovations a decade ago to survive the recession.

“Right now we are just crazy busy,” Fronckowiak says. “Our backlog is double what it was last year.”

While employee retention, and the stronger teamwork it provides, is a big key to the firm’s recent success, another element stems from J2’s nimble ability and willingness to take on all sized jobs. Within hospitals, retirement centers, airports and schools, for example, the firm’s employees are trained in dust containment, job site security and noise control. In hospitals, like the firm’s work at Sarasota Memorial Hospital, employees are also cognizant of medical records laws and patient awareness. Says Fronckowiak: “We are really good at working in complex facilities.”

Outside the market, Fronckowiak traces the company’s growth to a move three years ago to create and focus on 15 core values. The list includes servant leadership, excellent performance and follow the Golden Rule.

Fronckowiak and Fouche came up with the core values soon after they attended a seminar run by noted business and financial coach Dave Ramsey in Nashville. “It wasn’t a big rollout,” says Fronckowiak, of the initial core values, “but it really gave us clarity.”

The core values process has also provided J2 a road map to hiring top talent. The values, says Fronckowiak, are a big part of the company’s extensive interview process, which includes a psychological assessment. “We interview far more than most people do,” says Fronckowiak. “We tell people you have a job in day 91. (Before that) it’s really just a 90-day job interview.”

There’s one final driving force in J2’s success: resistance to rejection that starts at the top. “I’m motivated more by fear of failure,” says Fronckowiak, “than I am by success.”